Anyone else played Taiketsu rooms? - I started off thinking it was boring but it's turning into game Heroin. Just wondered if anyone else has ever played it.

3DO Kid.
by BryWI
no. Only you have games like these. lol

Silly little puzzle game. Originally, I thought it would be a rip off of Bomberman, but it's not, kind of more a competitive little party game... but to me it just lacks fun unless there are 4 players. Just one of Sanyo's few titles they pumped out when they launched the TRY 3DO system.

Drax
by jesus 666
OK, i've worked out that you need to turn the wheel's and then water comes out from the hole and zooms around till it goes to a drain but what the heck do all the collectable items do?!

TBH i'm hoping the items are amazing as at the moment I'm not too impressed with this on single player or multi-player, unlike bomberman it seems to lack direction.
by 3DO Experience
Yeah, actually I asked about the name of this game when I first came here, but the game isn't very fun IMHO.
by jesus 666
So does nobody actually know what those little icons do?!

Damn, I was hoping to convert my Top 40 3DO games feature into a top 50 but the chances are looking a bit slim now, so far I've only got Iron Angel the Return, Dragon Lore and Casper, with Gridders, Lost Eden and Twisted as maybe's

by 3DOKid
What little icons?
by jesus 666

When you blow up the balloons these little power-ups come out, like one with a wave or a rubber dingy, if you press the B button I think it uses them but nothing ever seems to happen

by acem77
Just found and played this gem for the 1st time with 2 of my friends.
if you like bomber man you will most likely enjoy this game.

I know what a handful of the items do,

the power up icons have green or red backgrounds, this may represent a offensive or defensive item?

Fish bowl: block a wave and kick over in any direction to create a wave.
Life raft: save yourself from going down the drains or swim off the wave.
Valve wheel: create a wave from anywhere
Ice: freeze a wave, and the player if touched, stuck until it thaws and washes them away.
Wave: ? speed up wave? No clue
Shrimp?/pink: ? slow down a wave? No clue

Anyone play the ps1 ver?
by 3DOKid
there is a PS1 version? Link me up please.
by acem77
i just bought it for 3do.

yea seems to be very rare. i searched like all mad for the ps1 ver have yet to find/play it....
found some dead links, have hope for one site but i have to be approved before the link will show up and its in russian..

no luck in newgroups, maybe irc?

Taiketsu Rumi-Zu!
by Scarlettkitten
I haven't got a clue how to play this game properly, I made a video showing some of the different level styles though.

by acem77
just got the ps1 ver, i like the 3do ver better
by acem77
Taiketsu Rumi-Zu
This is a fun bomber man like game with water for the 3do and ps1.
I was hoping someone could help me figure out the items.
Mainly for "Suiryou" the wave like icons blue and orange. My guess is they add or subtract from the wave size.
From my rough translation
Anything would be great. 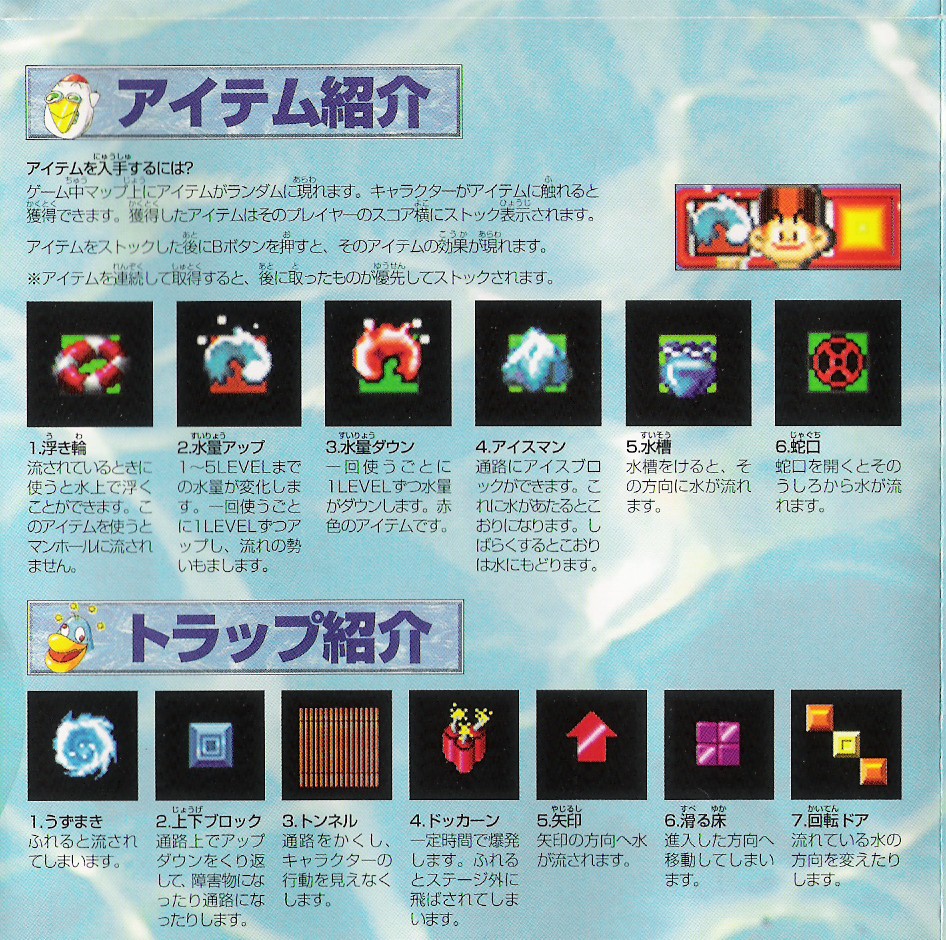 thanks to SNKorSWM on the neo-geo.com forums

Items: Press the B button to use items in stock. If you get two in a row, the most recent pick-up takes priority.

1. Float tube- float on top of the water, prevents from getting stuck in manholes.
2. Water level up- increase water level by 1 increment (from Lv.1 to 5)
3. Water level down- decrease water level by 1 increments (from Lv.1 to 5)
4. Iceman- temporarily freezes water and create an ice block in the passage.
5. Water tank- determines the direction of the flow depending on the direction it faces.
6. Crank- turn the crank to allow water to flow.

I've never played the game so it might be a bit out of context.
by 3DO Experience
GOLD MINE!
All times are UTC+01:00
Page 1 of 1
Powered by phpBB® Forum Software © phpBB Limited
https://www.phpbb.com/