Anyone here has a Sega CD? If so what games do you have?
http://www.xboxlc.com/profile/Cyberm0rph

i have 3 sega cd systems, 1 original and 2 of the 2nd version 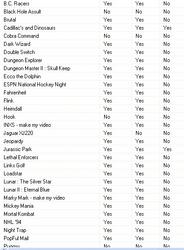 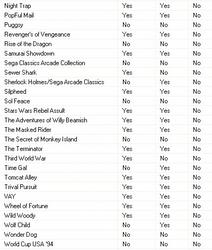 i also have Slam City w/ Scottie Pipen, Corpse Killer and Fahrenheit for the 32X cd
Ex-3DO collector extraordinaire , but i still have my collection
Villagephotos is dead, need to find my old pics and find another host
Top

I have zero games right now. I play them through.. *cough* ..Other means.

That's not entirely true, exactly. I just remembered I have a CIB copy of Eternal Champions, which I hold onto because it was one of the first games I played on the platform. Likewise, a disc-only copy of Batman Returns and Ecco the Dolphin. Surely I have a copy of Sewer Shark in the system box as well, but I don't remember.

Regardless of what I own now, I've played a good majority of the library though. If you need recommendations or something though, I can give them. I love the Sega CD, despite the minimal amount of games I own (physically) now.
http://www.youtube.com/c/gameplayandtalk
Top

I won't deny it, that although I don't own a MegaCD, I think my 'taste' in the 3DO & Jag has, invariably, drawn me to the MegaCD over time too. 32-X intrigues me too, but I hear that PAL pricing is horrific!

NeoGeoNinja wrote: but I hear that PAL pricing is horrific!

It has, but CDs aren't tough to duplicate, and the 32X works with Mega Drive flash carts.
Last edited by Austin on Sun Aug 31, 2014 6:25 pm, edited 1 time in total.
http://www.youtube.com/c/gameplayandtalk
Top

I'm not home right now but you can see my small collection of titles in the reflection in this photo.

BTW I have a Genesis 1 now and hope to get a bottom CD when I get rid of the LaserActive.
"Wait. You don't have a bag of charcoal in your gaming room???"
Top

however I bought it knowing it had a fault. It powers up however I believe pressing reset on megadrive should eject the tray however it does not only way it does that is If I press start on the bios screen then press open on the menu it does open....discs don't play though laser sounds like it might be trying to read then tray just ejects.

Thinking about replacing the laser as that will hopefully fix it but just wondering if anyone has any experience with that particular issue and if anyone can shed light on fact that currently mine does not eject the tray via reset. I have found the laser so if that will at least get it to run games I could live with the tray issue I guess. Also, can anyone confirm if the tray opening and closing should be making a fairly solid and loud clunking sound? In you tube videos etc I've seen the drawer seems to be a lot more "3do" like. Mine is pretty loud. Have silpheed sonic cd and final fight cd so would be good if could resurrect it for Christmas and if anyone can offer any advice at all would be much appreciated.
Top

Have it working now...and have wonderdog sonic cd final fight popful mail silpheed and wolf child. I love it

nostalgia is a big part of it but I do think it's got some decent games and I like the obscurity factor of it. Want flying squadron but the prices will make it tricky. Is cool system and I look forward to trying to get a few more games on it. Shame a lot of the games I fancy on it like batman weren't released in Japan. Now I just need a 32x.
Top
Post Reply
8 posts • Page 1 of 1