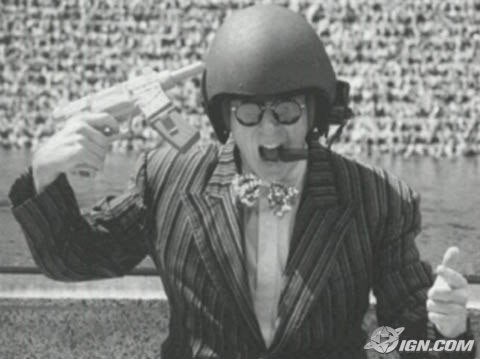 Do it do it FUCKING DO IT.

Plumbers Don't Wear Ties is not really a game. I mean, it is a game in the sense that something happens and you have partial -if fleeting and non-consequential- control.

Plumbers Don't Wear Ties could be the Cthulu of 3DO games, if it had tried harder or at all. As it is, it's kind of like Chtulu's nerdy little brother Ed. It is a... I'm having trouble coming up with a car equivalent. I'd say it's a 1961 Amphicar, but at least that thing is useful during floods. I suppose it's a PT Cruiser, since it's a thoroughly shitty and unsafe thing with a fun package.

The problem is that any language, even one as complex and hard for Mexicans to learn as English has limitations, and the sheer simple badness that goes into this, the bare-faced banality even, is hard to fit within the confines of most peoples' vocabulary. It is bad bad bad bad bad bad bad bad awful bad spam sausage eggs and spam bad.

Apparently the Angry Video Game Nerd popularized this baddie, but I can tell you, I owned the box and all. It was the one 3DO game I ever let go, traded and traded well for Captain Quazar.

You know what, screw it. I had pages and pages in my head that I was going to put down here, but you're reading this and that's not punishment enough. You OWE me, and now you're going to get the whole fist w/ brass knuckles.

http://www.youtube.com/watch?v=rjMAG5IDnek Go on. Play it. There's no difference between playing it via Youtube or on the original disc. PLAY IT, YOU DICKS.

Ah yes, I went into this expecting wonderful FMV badness. The ad blurbs had mentioned a lot of zany stuff, so it was a natural conclusion. I was ready for the ultimate bad entertainment experience. What I got was... ultimate bad.

The FMV isn't entertaining at all thanks to a juvenile string of sex jokes delivered by the worst actress known on Earth, the planet Xoomar, and the entire Alliance of Free Planets to boot, but like watching your mother perform a striptease it just keeps getting worse... it switches to slides. Fucking SLIDES. The company responsible for this farty blood bubble has the word "Entertainment" in its title, which I think makes it a prime candidate for a war crime tribunal.

Jesus, didn't I say I was going to stop writing? You can see what this thing does to a man. That's it, enough. Stop staring. I'm suffering enough as it is.

(Seriously, this game makes me kind of regret saying anything bad about Shenmue... not really, but kind of)
http://zine.reflexgamer.net

I was going to go with "vaginal bloodfart" but that seemed a little too overboOOPS
http://zine.reflexgamer.net

Possibly interesting trivia: PDWT used vertical blank as a timing source for the slide show. As a consequence, it fell out of sync badly on PAL systems such that, after about half a minute, the audio had nothing whatsoever to do with what was on the screen.

In fairness, that's close to the status quo when the game's running properly.

I just played through this with my fiancée tonight, and we had some good laughs. Of course it's garbage, but it's so bizarre and half-assed that it ends up being completely hilarious. I can't imagine paying retail price for it, and the joke would be a lot less funny if I were out fifty bucks! (What was MSRP for the game, anyway?)

Has anyone ever collared the developers/producers and gotten them to fess up about what in the world they were trying to do? I know Jeanne Basone has commented on GameFAQs about it, saying that she did it as a favor to a friend and that it was all in good fun. Did they deliberately set out to make an anti-game, I wonder? The comments on the selection screen make it sound like they knew it was a total piece of crap.

Anyway, I think Alfred Hitchcock Presents is worse. There's more of a game there, but it's a dishonest fraud. At least PDWT made me laugh, whereas AHP made me want to find the game designers and beat them with a sackful of pennies.
Top

That is indeed interesting. At least the game had no actual PAL release, though... right?
Top

What came after the Jaguar was the PS1 which for all it's greatness, ushered in corporate development and with it the bleached, repetitive, bland titles which for the most part we're still playing today. - David Wightman
Top
Post Reply
7 posts • Page 1 of 1